The early history of the Reserve, to about 1500 AD, is mainly that of farmland, with some woodland and wasteland (also often known as ‘common ground’), and with the unworkable steep slopes of the three glens left as natural habitats. In 2019 an archaeological survey of the open areas of the Reserve using a magnetometer found widespread evidence of continuous farming since at least Neolithic times, but of no substantial buildings or large-scale settlements. The survey, by the Hastings Area Archaeological Survey Group (HAARG), discovered prehistoric flints, pottery, field systems and circular burial enclosures, plus widespread medieval ridge-and-furrow plough marks and small farmsteads. The survey covered all the open land east of Ecclesbourne Glen and Shear Barn, excluding enclosed land, woodland and the East Hill.

Mesolithic Period (Middle Stone Age 10,000-4,000 BC) - The Mesolithic people were hunter-gatherers, and there is good evidence (small flint tools) of them hunting in the Reserve, but no sign of any effect on the landscape. The field immediately to the west of the Fairlight Coastguard Station shows signs of usage from the Mesolithic to the Late Iron Age, and was possibly a settlement. It was during this period, at about 6,000 BC, that rising sea levels separated England from France. Much flint was found on the site of the new Fairlight Visitor Centre.

Neolithic Period (New Stone Age 4,000-2,200 BC) - This was a more settled time, and Neolithic people could therefore leave evidence of their impact on the landscape. Fragments of tools and pots have been found in several places, probably the result of hunting activity. At this time the coastline was several hundred yards further out than now, with today’s high land on and near the cliff edges sloping down towards the sea.

Bronze Age (2,200-750 BC) - Some Bronze Age items have been found in the Reserve, including fragments of beakers for drinking in Ecclesbourne Glen. In a field between Warren Glen and Fairlight Road HAARG discovered seven circular features, from nine to 16 metres in diameter, which it thinks may be Bronze Age ring ditches or barrows probably associated with burial practices. A similar 20 metre burial enclosure was found near the New Barn pond. Trees from this time can be seen between low and high water marks all along the coast between Pett level and Bexhill.

Iron Age (750 BC - 43 AD) - A 2008 English Heritage report on the East Hill concluded that top of the hill may well have been an Iron Age promontory ‘fort’. The evidence is the prominent earthen bank on a sandstone ridge aligned north-south along its eastern edge, abutting Rocklands, with the north-west face of the hill being a steep natural down-ward slope. Iron Age ‘forts’ were important cultural and economic centres, where people (‘tribes’) living in the surrounding area met for reasons still not fully understood. But they were clearly places of great significance - a combined church, market, town hall, sports centre, theatre, hospital and farm, as well as a possible fortification. There was probably another, smaller fort on the West Hill, on the site of the Castle and Ladies Parlour, but there were few others elsewhere in eastern Sussex. There is no indication of a settlement within the East Hill fort, although this may be the result of a lack of modern excavation. The eastern half of the hilltop is a Scheduled Ancient Monument. Early maps (1750 by Samuel Cant, and the 1806 Ordnance Survey surveyor’s drawing) show the fort interior to be sub-divided by a number of boundaries - some still visible on the ground - forming small regular fields, which may fossilise an Iron Age or Romano-British field system. The layout shows there was some form of trackway running from Rocklands Lane in a straight line across the hill to where the steps today go down to Tackleway. When the hill extended further to seaward in pre-Roman times, could this track probably continued down to the beach. Elsewhere in the Reserve, post holes of a possible Iron Age hut were found near Fairlight Coastguard Station. A large quantity of pottery sherds have been found in the Reserve, dating from 200 BC to 50 AD. 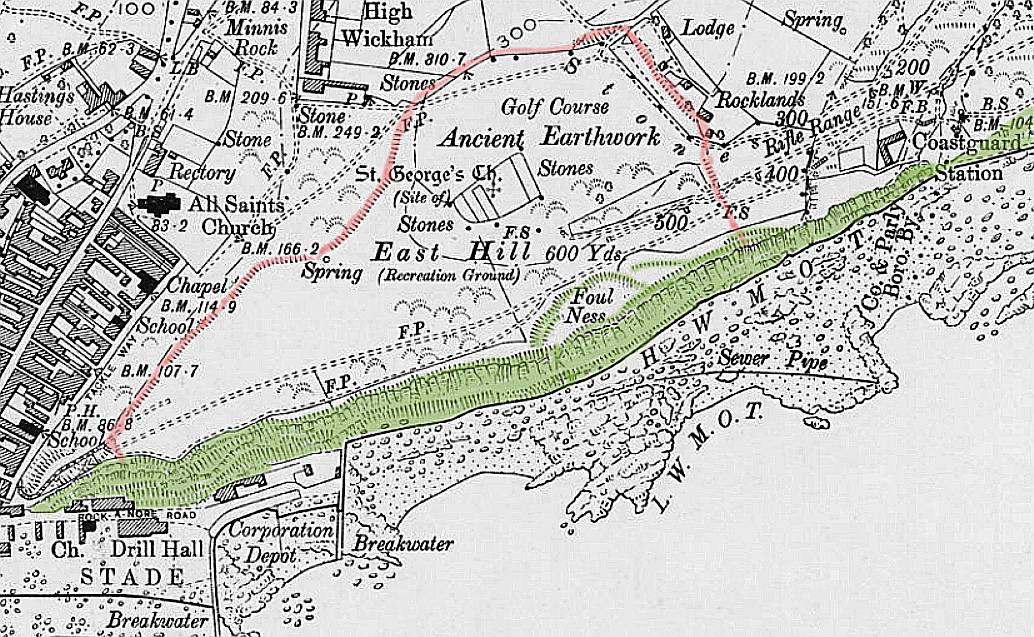 On this 1897 map, the top of the inland slopes of the hill fort and the ridge abutting Rocklands are in red, and the cliffs in green (coloured by Steve Peak).

Romano-British Period (43-410 AD) - It is unclear how attracted the Romans were to the Reserve area. Their nearest known interest was the major iron ore site at Beauport Park. They also probably used the natural harbour of the Priory Valley, where Hastings town centre is today. There may possibly also have been a port at Cliff End, to the east of Fairlight, accessed by the prehistoric trackway that underlies Fairlight Road and went across the field at the top of Warren Glen and past Warren Farm, although there is no evidence of this. Early writers were keen on boosting the role of Hastings in the Roman era. The East Hill was said to be of significance because of a possible Roman lighthouse (now thought to be an early 16th century windmill) where the fire beacon is today, and maybe a Roman signal station, which is today’s picnic site on top of the hill. There is no firm evidence of any early role for the picnic site, either as a signal station or later churchyard, but about 30 brass Roman coins were found there in 1840. The English Heritage report says that, although the data was uncertain, 'it does seem possible that there is a hitherto unsuspected and substantial Romano-British presence in the immediate vicinity of the East Hill'. But regarding the picnic site, the report states that 'unfortunately, no definitive conclusion can be reached about the original date and function of this enclosure': The only certainty is that it is pre-1750; otherwise its age and purpose are unknown. Roman pottery has been found on Reserve cliffs, so there could have been a Roman settlement/building on the lost cliff-land. There was possibly also a Romano-British hearth and hut site in the wood on the clifftop above Covehurst.

Saxon Period (Dark Age 410-1066) - The Haestingas - Danish or German migrants - settled in what was to become the Hastings area in the 7th century. They were brought under control by King Offa in 771. The town of Hastings emerged in the late 9th century, based on White Rock, reflecting the new national economy based on trade, manufacturing and transport. An excavation in August 1856 (see that date, below) shows there was a possible high status 10th-11th century Saxon burial site and stone building on the East Hill, by the lift. If correct, the significance of this feature has been largely overlooked in assessing the history of Hastings at this time. In addition, Reserve place names show the Saxons were farming extensively across the Reserve; eg, Fairlight was then Farnlege, meaning 'bracken clearing'.

Medieval Period (1066-1500) - The medieval landscape probably comprised small islands of open arable fields around the farms, surrounded by larger patchworks of enclosed pasture, woodland, heath and waste land. There was no village or hamlet in the Reserve area, only farms, most notably Fishponds Farm and Warren Farm. Fishponds (or Fishpond) Farm seems to have been the most significant group of buildings in the area through the medieval period and up to the expansion of Fairlight Place and its farm in the 19th century. The existing Fishponds farmhouse probably dates from the end of the 16th century, but there was almost certainly a much older house on the site. This seems to have been the local ‘hall’ of the manor of Brede from 1402 onwards. Brede Manor was the successor of the ancient Rameslie Manor, which dated from at least 1017, when King Canute granted most of the land between Hastings, Rye and Brede to the Abbey of Fécamp in Normandy, thereby probably influencing King William’s choice of an invasion area in 1066. 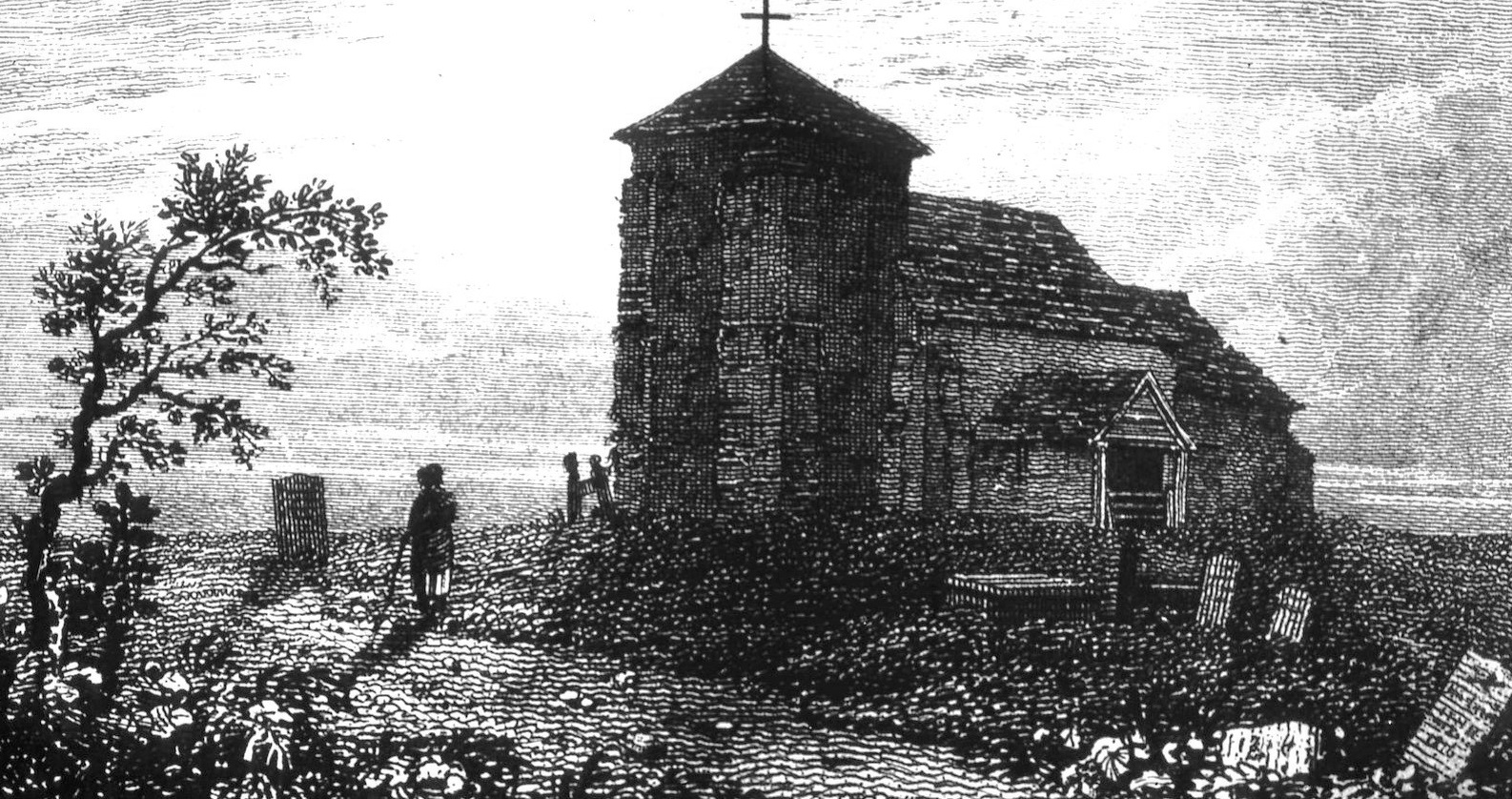 Fairlight, in common with much of the Weald, was a rural parish of scattered settlement throughout the medieval period. The first known Fairlight Church was built in 1180, but there was no nucleated settlement around it (the present village of Fairlight is post World War One). A medieval church of St George has often been said to have occupied the rectangular picnic site, known as St George’s Churchyard, on top of the East Hill, but there is no evidence of this. The enclosure seems to have started as an isolated plot of glebe land supporting the rector of All Saints, and in the 17th/early 18th centuries there may have been some burials there for unusual deaths, such as victims of the plague. A windmill described as 'new' in 1540 stood on the East Hill cliff edge near the lift, and was mistaken for a Roman lighthouse. It had gone by 1750, although the area was still called 'Mill Field'.

The Reserve has been a source of rock and sand for many centuries. The earliest record of quarrying in this area dates from c1367, when sandstone from somewhere in Fairlight (not necessarily the Reserve) was taken by sea to Rochester Castle as part of Edward III’s major reconstruction of that semi-ruined building.